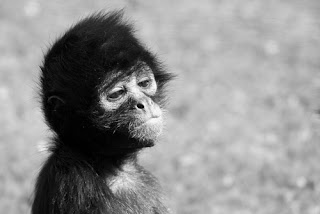 I woke up this morning an hour before my alarm clock sounded. I realized that I would not be able to get back to sleep so I held a few yoga stretches and lay back down to meditate. I was doing so concertedly, concentrating on abating the chaotic negative thinking that is constantly going on in my mind. I tried to notice the recurring waves of negative thought crash on the forefront of my consciousness and I was trying to break them up slowly but methodically by examining the sensations involved. I found myself actually making some headway. I felt some of the storm clouds in my mind begin to dissipate and then I realized what was really happening… I was slowly relaxing a low-grade, perpetual frown or grimace from my face that I must have learned to ignore long ago. This is a subtle wincing, barely perceptible in a mirror, that I believe may afflict many of us and contribute to psychological distress and even psychiatric disorder.
I stayed in bed for a full hour keeping the contorting expression from coming back. As soon as my mind wandered, the tension around my eyes would resurface and I realized that my motor systems had become accustomed to sustaining it. Similarly, I have found that, ever since a series of "traumatic" incidents 8 months ago, I wake up every morning clinching my teeth. There are many examples of our muscles retaining tension that is completely unnecessary. This happens because the brain systems responsible have compensated for the constant demand and moved on without continuing to apprise us of their relentless activity. By habituating to such burdens we force ourselves to carry them unknowingly. I think that this subliminal frown has contributed a good deal to my anxious and depressive thinking.
After contemplating this and attempting to bring awareness to the feeling of frowning (and its absence) for an hour, I got dressed and went on with my day. But something was very different. It was as if a huge weight was lifted. I felt like I had taken a powerful antidepressant - the feeling was unmistakable. Throughout the day today I noticed that the frown would return all on its own. Each time I noticed it, I allowed my face to turn placid again and the calm, tranquil feeling would reinstate. Now, at the end of the day, just thinking about frowning makes me feel nauseous. Holding a frown now feels like I am reinflicting a wound. I hope I never go back to inadvertently and subconsciously maintaining a discomfort-inducing countenance.
Now you might be a little skeptical. You might not believe that people have the capacity to unwittingly carry mental hardship with them in the form of a frown. But imagine a small monkey. Imagine this monkey was traumatized as a baby and ever since has trod around with a wince on his little face. He will derive pain from it. Just imagine how this would affect his inner world, his encounters with others and their impressions of him. He inevitably will perceive things as more negative than they really are because of the powerful interrelationships between bodily expression and emotional condition. The biological underpinnings of this have been explored by the "facial feedback hypothesis." I think a frown actually has the capacity to create a “somatic marker,” anchoring you to an aversive state. Please, spend a few moments of your own looking for this in yourself and taking measures to counteract it.

The following is a transcript from an interview that I did about autism regarding the solitary forager hypothesis. The questions, formulated by ecologist Nelida Pohl, were really thoughtful and forced me to think carefully about the issues involved.


"It's hard to know exactly what was going through 8-year-old Robert Wood Jr.'s mind as he wandered for five days through the woods in Hanover County, but it's possible that aspects of his autism helped him survive as much as they contributed to his disappearance. Educators familiar with Robert say his quiet determination and lack of self-awareness may have carried him through."
Posted by Dr. Jared Edward Reser at 10:32 AM No comments:

The Brain Basis for the Continuity of Thought 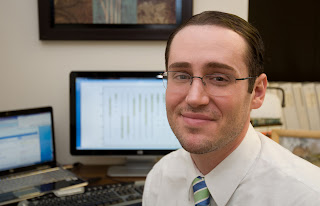 If we could pause your mind at this instant and look carefully inside your brain, we would see that some brain cells are active and others are inactive. How long these neurons continue to fire after we unpause your mind is determined by how much input they are getting from other active neurons. If they are not being sent more than the requisite number of messages from their peers, they slow down or turn off.   Some of the currently active neurons will remain active for only a few milliseconds, others for large fractions of a second and others for several seconds. None remain active indefinitely, but rather they each persist for different durations. The pattern of activity in the brain is constantly changing, but because some individual neurons persist during these changes, particular features of the overall pattern will be conserved over time. In other words, the distribution of active neurons in the brain transfigures gradually from one configuration to another, instead of continually changing all at once. I believe that the persistence of certain neurons allows the temporary maintenance of mental imagery which is a central hallmark of consciousness and working memory. I also believe that this persistence lends continuity to the train of thought.
Six years ago I was waiting at a bus stop wondering how my mind is different from that of other animals. I realized that my thoughts can extend further in the sense that I can carry a complex concept out to its logical conclusion. I can take more information with me through time before I lose it and forget what it was I was just thinking about. Psychologists agree that working memory, or the ability to preserve information and perform manipulations on it, is more highly developed in humans. Influenced by the various lengths of different pine needles on a Douglas fir at the bus stop, I concluded that human thoughts were somehow “longer.” But if thought has a length associated with it, then it must have a beginning and an end too. I wondered for a while if thoughts really do begin and end, and if so, on what time scales. I now believe that it is possible to answer these questions using the reasoning in the previous paragraph.
Thoughts have length in a sense, but thoughts do not have a clear beginning or an end. Thoughts are “longer” in humans because they are composed of elements (that correspond to individual neurons, or neural assemblies) that remain active for longer periods than they do in other animals. Our large prefrontal cortex and association areas keep some neurons online for several seconds at a time, whereas in our pets, for example, most neurons remain active only very briefly. So it is not that individual human thoughts are longer, it is that our thoughts are composed of elements that remain coactivated for longer. The neurons that persist stop and go at different intervals. It is not the case that all of the neurons that persist turn on and off simultaneously. In fact, the beginning of the activity of one neuron will actually overlap with the tails of others. The neurons act like racecars that join in and drop out of a race intermittently. Their behavior is staggered, insuring that we continually have a cascade of cognitive elements that persist through time. Thus there is no objective stopping or starting point of thought. Instead, thought itself is composed of the startings and stoppings of huge numbers of individual elements that, when combined, create a dynamic and continuous whole.
Sensory neurons in the back of the brain do not usually remain active for long. It is the anterior, association areas, especially the prefrontal cortex that contains neurons that stay online for seconds and even minutes at a time. These neurons, by remaining active, can mete out sustained signaling to other neurons, insisting that the representations that they code for are imposed upon the processing of other neurons that are firing during their span of activity. This is why the prefrontal cortex is associated with working memory, mental modeling, planning and goal setting. The longest, most enduring element or neuron would correspond to what the individual is most focused on, the underlying theme or element that stays the same as other contextual features fluctuate.
Thought changes incrementally during its course. We picture one scenario in our mind’s eye and this can often morph into a related, but distinctly different scenario. Our brain is constantly keeping some elements online whether they are representations of things that are concrete and tangible or abstract and conjunctive.  I think that neural continuity as described here is an integral element of consciousness and may be a strong candidate for the “neural correlate of consciousness.” Philosophers and neuroscientists have identified many different elements of brain function (thalamocortical loops and reentrant cortical projections) and attempted to explain how these may lead to conscious experience. I think that the present concept of “continuity through differential temporal persistence of distributed neural activity” is instructive and I even feel that it is the core aspect of conscious experience, qualia and phenomenality. 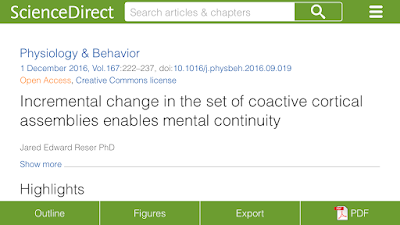