I believe that consciousness and working memory are driven by the reciprocating cross-talk between fleeting bottom-up imagery in early sensory cortex and lasting top-down priming in late association cortices. The images below attempt to explore how this reciprocal interaction works. This model depicts how the central executive (the association areas) directs progressive sequences of imagery in the visuospatial sketchpad and the phonological loop (sensory areas). 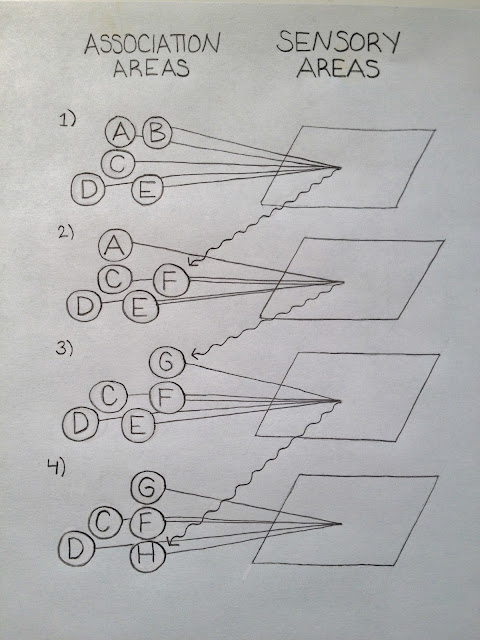 Diagram 1: Each concept held tonically active in association cortex is represented by a letter. The order these letters are pulled into consciousness arbitrarily follows alphabetical order. 1) Shows that concepts A,B,C,D and E all diverge onto posterior visual sensory cortex. 2) Shows that neurons involved in the retinotopic imagery from figure 1 converges on the association neurons responsible for holding concept F. It also shows that concept B drops out of activation, and that A, C, D, E and F remain active and diverge back onto visual cortex. 3) Shows that this same process leads to G being activated and A being deactivated in association cortex. 4) Shows that H is activated and that E is deactivated. 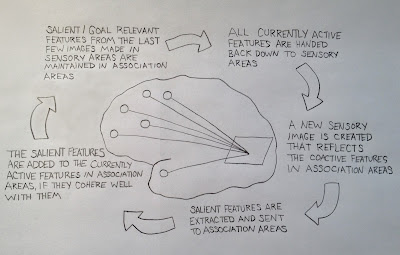 Diagram 2: Sensory areas can only create one sensory image at a time, whereas association areas are capable of holding the salient or goal-relevant features of several sequential images at the same time. In other words, neurons in association cortices can remain tonic for a number of seconds, making activity there progressive because it can reflect the most important aspects of several successive instances of sensory activity. Dopamine is key to this progressive process because it helps to determine which features are relevant/motivating. This process can be described by the following list:


1)  Sensory imagery is made in early sensory cortex. This is either a product of feedforward sensory information from sense receptors or from downstream retroactivation.


2)  Salient features are extracted and communicated with higher association areas


4)  The important features of the last few images are maintained active in association areas.


5)  The new set of features is handed down to early sensory areas.


6)  This new set of features is used by early sensory areas to construct topographic imagery. In reality, sensory cortex from each sense modality feeds their inputs to association cortex (and to each other).


A few months ago I thought to myself that if the association cortex could be protagonized what it has to say to earlier sensory cortex would be along these lines:

“Ok, I see the imagery that you have just generated and I have used it to update my own list of relevant concerns. Now, I believe that this updated list of concerns will change our perspective on the last few thoughts. Take this new concern, along with these other concerns that we have recently been handing back-and-forth and do your best to portray them all simultaneously in a single image. Then the image that you build will pass up our hierarchically-structured interface updating me of the new, goal-relevant concerns that your imagery was able to automatically identify”

This reasoning frames consciousness as a  polyconceptual, "partially-conserved, progressive process,” that performs its high-level computations through “reciprocating transformations between buffers.” More specifically, it involves “reciprocating transformations between a partially conserved store of multiple conceptual specifiers and another nonconserved store that integrates these specifiers into veridical, topographic representations.”
In other words, the association cortex is always saying the following to sensory cortex: “Ok gotcha, well then what about this, can you rapidly create an informative topographic image with these specifications?” And the early sensory cortices play along by cooking up the best image they can to corepresent the constructs handed down to them. In my opinion, these active nodes in frontal areas create the executive, and its top-down cognitive control. The diagram above makes this process seem somewhat random, but its not. The selection of features in association areas has been programmed by personal history and thus they have the capacity for creating "us." For more information see: "How Thought Propagates Part 1."

Posted by Dr. Jared Edward Reser at 10:25 PM No comments: