Could Forehead Dimensions be Correlated with Prefrontal Cortex Size?

I have spent years thinking about the foreheads of fossil hominids. I used to view the skulls looking for personality and psychological traits by looking at the eyes, mouth and jaw but now I look at the feature-sparse space above the eyes. Could the forehead of a hominid/hominin species tell us about its lifestyle, or brand of intelligence? Physical anthropologists have amassed a large amount of metric data on skulls from archaic humans but no data about neuroanatomy due to the fact that brain tissue does not fossilize. What inferences can be drawn about neurology if all that is left is bones? A number of converging lines of evidence gave me a hunch that the size and dimensions of the forehead may predict the volume and surface area of my favorite brain region, the prefrontal cortex (PFC). Even though I have been wondering about primate foreheads for years, I am not completely sure if this hunch is a valid one. Take a look at the evidence with me and maybe you will agree that it is an interesting concept with some intriguing implications.


Physiognomy and anthroposcopy are the relatively out-of-favor sciences of determining personal characteristics from features of the face or body. Phrenology and craniometry are the very much out-of-favor sciences of determining psychological characteristics from bumps or measurements of the human skull. The size of most regions of the brain cannot be determined by the shape of the skull alone. Even the endocasts that paleontologists form from the fossilized inside of skulls give very little information about the relative sizes of the brain’s internal components. If I knew this to be true, then why would I think that the size of the prefrontal cortex could be estimated from the size of the forehead (also known as the frontal bone pictured below)? Well… the forehead, or frontal bone, has some unique geometric aspects and it usually completely encompasses the PFC. 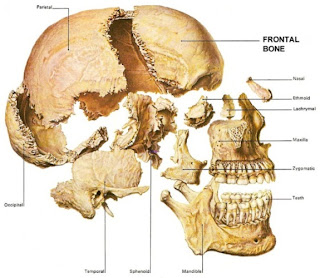 
Interestingly, there is no frontal lobe below the eye line. This whole area behind the face is taken up by the eyes, the optic nerves, the nasal passages, the palate, tongue, mouth and pharynx. This means that no matter how big your face is, face size alone is not an indicator of brain size because there is literally no brain behind it. This known fact makes it seems that brain size is going to be directly and significantly correlated with how much head one has above the eye line. 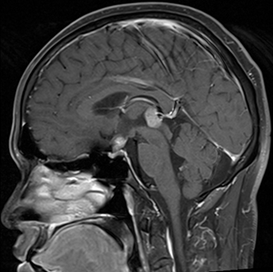 Notice that there is no frontal cortex at or beneath the eyes. 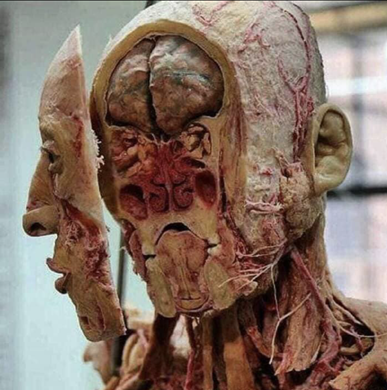 Chimpanzees have very little forehead. If you place a human head and a chimp head side-by-side, the chin, lips, nose and eyes may line up, but the human forehead towers above the top of the chimp’s low brow. Clearly, the dimensions that are of interest are the height (from the eyebrows, or orbits, up to the point where the forehead begins to recede), and the width (from temple to temple) of the forehead. 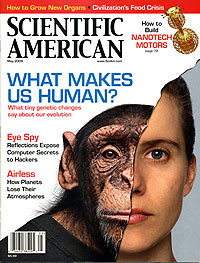 If the chimp didn’t have a bony “brow ridge” the difference in head proportions would be even more obvious.


Many forms of mental retardation are accompanied by very low brows and these individuals often have disproportionately small PFCs. People with microcephaly, a condition where a person’s head size is in the bottom 2% of the population, have heads that are more face, and less dome. This condition and the slanted, backward-projecting brow are probably on a continuum with large head size and full brow. These dimensions are very similar to those seen in hominids before 1 million years ago. 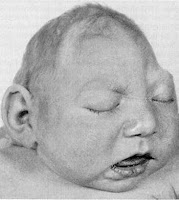 A baby with congenital microcephaly


As hominids grew more intelligent and their brain size increased, their forehead grew relative to the rest of their head. To me this extension of the “cranial vault” was the most prominent and important change during human evolution, which took place from australopithecines, through Homo ergaster up to Homo sapiens. During this phylogenetic trend the skull grew in size, more upward than outward.  This trend may have reached its pinnacle in archaic Homo sapiens in the last 50,000 years before reversing and resulting in modern man. In fact, fossils skulls from around the world (like those found in Boskop, South Africa) feature brains significantly larger than the average modern brain. Interestingly, not only are these skulls larger but many are taller and full-browed. 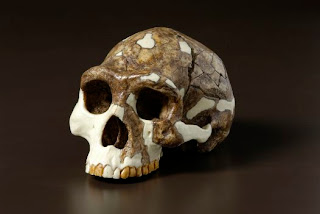 
Is it possible to use this information to make judgments about different hominid species based on forehead measurements? Could this be a valid approach to making estimates of the relative intelligence of our forebears? In many ways it is not… It is certainly not accurate to judge ingenuity, perspicacity or insightfulness based on the proportions or size of the head. First of all, even if we had definite brain tissue fossils that gave reliable measurements of various hominid brain regions, it would only tell us about one facet of what can make a species imaginative or intelligent. Second, I have written extensively about the negative impact a large PFC may have on reproductive fitness. I have speculated about how natural selection may have selected against the traits that the PFC is responsible for, including: inhibition of instinct and emotion, response lag, stiltedness, hyperfrontality, stoicism, neuroticism and repression. Third, the PFC helps us keep many things in mind at once, but this only represents one type of processing strategy - one form of overall intelligence - which may actually work antagonistically or competitively with other forms such as creativity, originality, spontaneity and speed of processing.
On the other hand, the prefrontal cortex, and other association areas, are responsible for many of our higher-order thinking abilities. Its cells sit at the very top of the cortical hierarchy. They take inputs from many cells below them in the hierarchy which encode less abstract, less generalized concepts. Their receptive fields are the most complex and they exhibit sustained firing for the longest periods. I believe that even though they do not have the biggest brains, modern humans may be the smartest animals on the planet. Even though dolphins, whales, and elephants have larger brains, their prefrontal cortex is not as large. I think humans are the most intelligent because of the receptive fields and persistent activity of cells in the prefrontal cortex.
Importantly, a hominid species like Homo erectus with a small forehead could possibly still have a relatively large prefrontal cortex depending on how the brain is distributed under the skull. This might be especially likely if the central sulcus was particularly far back (posteriorized). …So the forehead may offer information about the size of the prefrontal cortex, but it certainly does not tell the whole story. Even if it does predict the surface area of the grey matter, or the volume of the white matter, it would not necessarily tell us anything about the volume of the grey matter or the extent of cortical convolution.


A focus on head height as opposed to overall head size, is an interesting change in perspective. Head height is not captured by the calipers that the scientists of the early 20th century used so frequently. It is also not captured by the head circumference measures used by obstetricians and pediatricians (except for the large extent to which head height covaries with head circumference). Also head height and forehead length would not be limiting factors during childbirth. It is the girth of the human head that selected our greatest grandmothers to have more expansive hips and wider birth canals. However, the height of a baby’s head would not have made delivery any more difficult.


O.K., what about the back of the head then? Some hominids have a large outpocketing of the back of the skull that protrudes beyond the neck. It looks as if someone placed a hamburger bun on the back of their head. Neanderthals had large outpocketings of the back of the skull and these are referred to as “occipital buns.” It is thought that, in Neanderthals, these may have housed an extended area of cortex devoted to processing visual information or perhaps an enlargement of the cerebellum. Skulls with narrow heads (dolicocephalic) are more likely to exhibit this trait and it is thought that it helped our ancestors to solve the “packing problem” of fitting brain into the skull. In other words, people who have narrow heads usually have longer heads. Clearly there are many ways to solve packing problems and skull shape may have more to do with different packing strategies than with the relative size of different neuroanatomical areas.


I think it would be interesting to collect real data about specific craniometric traits in an attempt to see how they correlate with different psychological constructs and individual differences. Even though the hominids are dead and gone, we can make interpolative inferences based on studies of humans and other primates. Perhaps the absolute size and dimensions of the occipital plate or the frontal bone do predict subtle variations in brain type and even in conscious experience.

I think brain evolution is a fascinating topic. Here are some of my favorite books on the subject: