What follows is the text for the poster that I presented at the 2013 conference for the Association for the Scientific Study of Consciousness, ASSC 17, July 12th-15th. 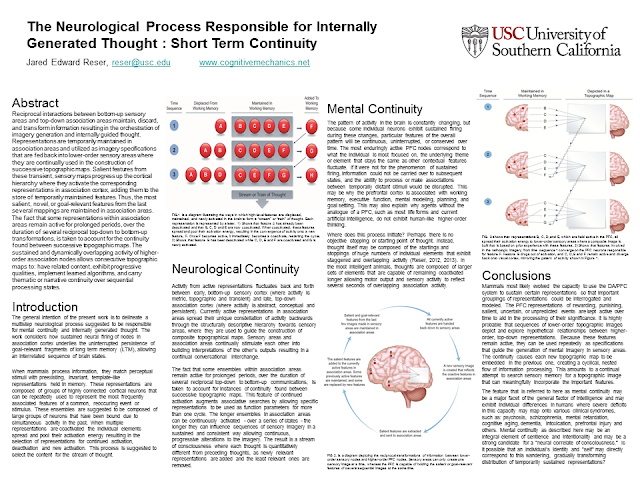 Reciprocal interactions between bottom-up sensory areas and top-down association areas maintain, discard, and transform information resulting in the orchestration of imagery generation and internally guided thought. Representations are temporarily maintained in association areas and utilized as imagery specifications that are fed back into lower-order sensory areas where they are continually used in the construction of successive topographic maps. Salient features from these transient, sensory maps progress up the cortical hierarchy where they activate the corresponding representations in association cortex, adding them to the store of temporarily maintained features. Thus, the most salient, novel, or goal-relevant features from the last several mappings are maintained in association areas. The fact that some representations within association areas remain active for prolonged periods, over the duration of several reciprocal top-down to bottom-up transformations, is taken to account for the continuity found between successive topographic maps. The sustained and dynamically overlapping activity of higher-order association nodes allows consecutive topographic maps to: have related content, exhibit progressive qualities, implement learned algorithms, and carry thematic or narrative continuity over sequential processing states.

The general intention of the present work is to delineate a multistep neurological process suggested to be responsible for mental continuity and internally generated thought. The work considers how sustained neural firing of nodes in association cortex underlies the uninterrupted persistence of goal-relevant fragments of long term memory (LTM), allowing an interrelated sequence of brain states.

When mammals process information, they match perceptual stimuli with preexisting, invariant, template-like representations held in memory. These representations are composed of groups of highly connected cortical neurons that can be repeatedly used to represent the most frequently associated features of a common, reoccuring event or stimulus. These ensembles are suggested to be composed of large groups of neurons that have been bound due to simultaneous activity in the past. When multiple representations are coactivated the individual elements spread and pool their activation energy resulting in the selection of representations for continued activation, deactivation and new activation. This process is suggested to select the content for the stream of thought. 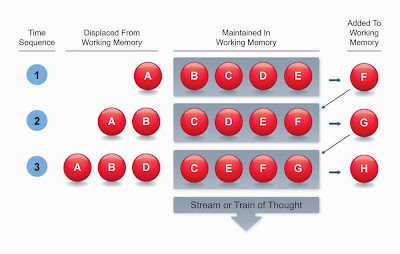 FIG.1 is a diagram illustrating the ways in which high-level features are displaced, maintained, and newly activated in the brain to form a “stream” or “train” of thought. Each representation is represented by a letter. 1) Shows that feature A has already been deactivated and that B, C, D and E are now coactivated. When coactivated, these features spread and pool their activation energy, resulting in the convergence of activity onto a new feature, F. Once F becomes active, it immediately becomes a coactivate, restarting the cycle. 2) Shows that feature B has been deactivated while C, D, E and F are coactivated and G is newly activated.


Activity from active representations fluctuates back and forth between early, bottom-up sensory cortex (where activity is metric, topographic and transient) and late, top-down association cortex (where activity is abstract, conceptual and persistent). Currently active representations in association areas spread their unique constellation of activity backwards through the structurally descriptive hierarchy towards sensory areas, where they are used to guide the construction of composite topographical maps. Sensory areas and association areas continually stimulate each other into building interpretations of the other’s outputs resulting in a continual conversational interchange.


The fact that some ensembles within association areas remain active for prolonged periods, over the duration of several reciprocal top-down to bottom-up communications, is taken to account for instances of continuity found between successive topographic maps. This feature of continued activation augments associative searches by allowing specific representations to be used as function parameters for more than one cycle. The longer ensembles in association areas can be continuously activated - over a series of states - the longer they can influence sequences of sensory imagery in a sustained and consistent way allowing continuous, progressive alterations to the imagery. The result is a stream of consciousness where each thought is quantitatively different from preceding thoughts, as newly relevant representations are added and the least relevant ones are removed. 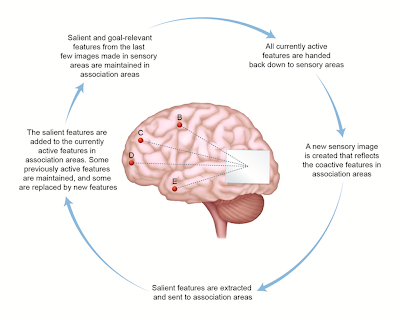 FIG 2. is a diagram depicting the reciprocal transformations of information between lower-order sensory nodes and higher-order PFC nodes. Sensory areas can only create one sensory image at a time, whereas the PFC is capable of holding the salient or goal-relevant features of several sequential images at the same time.

The pattern of activity in the brain is constantly changing, but because some individual neurons exhibit sustained firing during these changes, particular features of the overall pattern will be continuous, uninterrupted, or conserved over time. The most enduringly active PFC nodes correspond to what the individual is most focused on, the underlying theme or element that stays the same as other contextual features fluctuate. If it were not for the phenomenon of sustained firing, information could not be carried over to subsequent states, and the ability to process or make associations between temporally distant stimuli would be disrupted. This may be why the prefrontal cortex is associated with working memory, executive function, mental modeling, planning, and goal setting. This may also explain why agents without the analogue of a PFC, such as most life forms and current artificial intelligence, do not exhibit human-like higher-order thinking.

Where does this process initiate? Perhaps there is no objective stopping or starting point of thought. Instead, thought itself may be composed of the startings and stoppings of huge numbers of individual elements that exhibit staggered and overlapping activity (Reser, 2012, 2013). In the most intelligent animals, thoughts are composed of larger sets of elements that are capable of remaining coactivated longer allowing motor output and sensory activity to reflect several seconds of overlapping association activity. 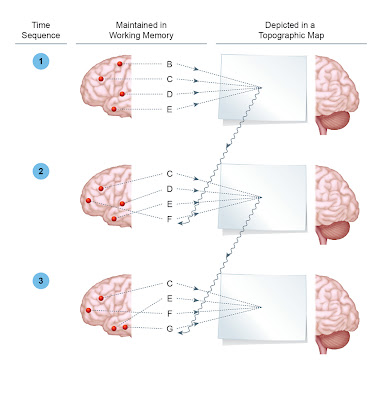 FIG. 3 shows that representations B, C, D, and E, which are held active in the PFC, all spread their activation energy to lower-order sensory areas where a composite image is built that is based on prior experience with these features. 2) Shows that features involved in the retinotopic imagery from time sequence 1 converge on the PFC neurons responsible for feature F. Feature B drops out of activation, and C, D, E and F remain active and diverge back onto visual cortex, mirroring the pattern of activity shown in Figure 1.

Mammals most likely evolved the capacity to use the DA/PFC system to sustain certain representations so that important groupings of representations could be interrogated and modeled. The PFC representations of rewarding, punishing, salient, uncertain, or unpredicted events are kept active over time to aid in the processing of their significance. It is highly probable that sequences of lower-order topographic images depict and explore hypothetical relationships between higher-order, top-down representations. Because these features remain active, they can be used repeatedly as specifications that guide the generation of mental imagery in sensory areas. The continuity causes each new topographic map to be embedded in the previous one, creating a cyclical, nested flow of information processing. This amounts to a continual attempt to search sensory memory for a topographic image that can meaningfully incorporate the important features.


The feature that is referred to here as mental continuity may be a major facet of the general factor of intelligence and may exhibit individual differences in humans where severe deficits in this capacity may map onto various clinical syndromes, such as: psychosis, schizophrenia, mental retardation, cognitive aging, dementia, intoxication, prefrontal injury and others. Mental continuity as described here may be an integral element of sentience and intentionality and may be a strong candidate for a “neural correlate of consciousness.” Is it possible that an individual’s identity and “self” may directly correspond to this wandering, gradually transforming distribution of temporarily sustained representations?

The full article based on this poster can be found here: 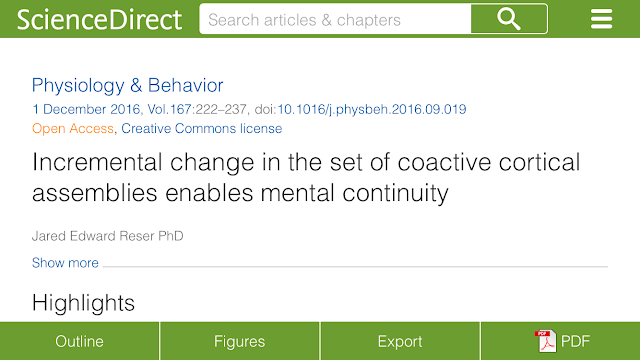