Realizing I Was Made of Cells Made My Skin Crawl 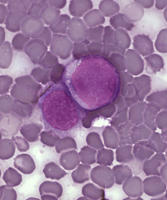 I remember being in my 8th grade biology class and coming to a mind-shattering revelation. I sat there as I did everyday that semester, bored and completely mentally checked out (it is ironic that today the only thing I get really excited about is biology). The teacher began to show some videos of cells on the overhead. I was amazed by the way they looked and by the way they buzzed and jittered about. It was fascinating how their microscopic movements, propelled by flagella, were so different from movements I was used to seeing on a macroscopic scale. I was thinking about the cells we had cultured in petri dishes and how they spread and multiplied. I began to wonder about how the cells that I am composed of move when it hit me...
Somehow, up until this point, I had never really appreciated how I was composed - from head to foot - of individual cellular organisms. I was made of cells that, if cultured properly, could each live on their own. These cells that combined to make me, could not all self-replicate, but they each descended from ancestors, like bacteria and protists, that could. All of the sudden I was no longer myself. I was simply a blob, a colony of organisms, each of which wanted me to feed them. I was revolted and enthralled at the same time. Somehow this insight was extremely emotionally powerful, as if someone had proven to me that I was made up of millions of tiny, disgusting insects.

I had previously come to grips with the fact that I was composed of individual atom and molecules, none of which were alive but each of which contributed to who I was. However, something about being composed of individual forms of life - that could live on their own in a petri dish with a food substrate - hurt me badly. It felt like having my privacy invaded by foreign beings, but I wasn't invaded by them, I was them.

It was immediately clear to me that all of my thoughts, dreams, memories and aspirations were somehow held together by connections between living cells. I was interested to know how these cells work together to create my thoughts and behaviors, but I was too overcome with, what felt like, true grief to think much about this. I felt like I had completely lost my selfhood and my sentience. I remember sitting in the cafeteria as a mass of wet, slimy cells, surrounded by other moving, talking but oblivious masses. I felt like I was the only cluster of gunk in the whole junior high that understood it was a cluster of gunk. I was certainly the only one worried about it. Everything that was familiar and comforting, from my voice to my appearance to my language, was now hideously derived.

What caused me to feel this way was the sentiment that, like the people of a country, the parts of a whole are often what is real and important and the whole itself is nominal and inconsequential. Since, I have changed my mind about this. :) I have since come to know more about how colonies of cells began to build animals and how animals became progressively more intelligent and individualistic. This allowed my focus to shift enough so that I still sometimes see the cells as individual organisms, but I see the animal as a "superorganism." Both viewpoints are valid. I look back at this experience as taking a "cells eye view" of the world. It was eye-opening to me and has caused me to look for other perspectives on myself that could change my worldview.
Posted by Dr. Jared Edward Reser at 9:12 PM