How Do Hippocampal Memories "Migrate" to the Cortex? 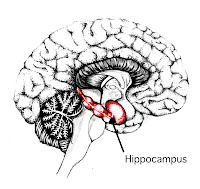 The hippocampus is a finger-shaped brain area that is necessary for a very important kind of memory. You have two, and they extend a couple of inches beneath your cheeks back towards your ears. Your hippocampi serve as the repositories for all of your short term memories. As crazy as it sounds, people cannot form almost any new explicit, contextual or episodic memories without the hippocampus. A few people in recent medical history have had the area removed or badly damaged and their deficits are illuminating. These individuals basically cannot remember anything they have done, any place they have been or anyone they have met since the damage took place.

Much recent research has shown that the hippocampus probably does not actually hold the memories itself. Rather, it has the ability to take snap shots of what is going on in the cerebral cortex. Its unique connectivity allows it to keep track of which cortical association areas are firing together at a certain time. It records the coordinates of these coactivated areas of cortex allowing it to remember patterns of activity. Later when the environment, or a thought, causes a portion of a previous pattern to become active within the cortex, the hippocampus is able to recognize this and reactivate the other areas that were coincident with this portion before. This unique ability of the hippocampus is called "pattern completion" and is thought to underlie the mammalian capability for short term memory. Interestingly though, birds, reptiles, amphibians and even fish have brain areas that are equivalent (or homologous) to our hippocampus.

Scientists know that when you lose your hippocampus you not only lose the ability to remember new things (to complete recent patterns) but you also lose most of what has happened to you in the last two years. For instance, if your hippocampi were removed today you could remember a lot of autobiographical information, but would have trouble remembering most of what happened to you over the prior two years. This finding caused scientists to assume that over the course of two years, memories must migrate out of the hippocampus and into the cortex. When I first read this, I didn't know how to conceptualize this "migratory process." I imagined small, physical objects moving from the hippocampus to the cortex. This is of course absurd because memories are not tangible things, they are made of tiny intricate modifications of existing circuitry. Even knowing this, I didn't know what to replace this conceptualization with until recently.

I no longer think that the brain's memories are physically shuffled around. I think that the hippocampus is constantly recording patterns, and only when it is later stimulated to complete one of these pattern, does it share what it holds. Individual instances of this sharing may underlie the transfer process. I think that the cortex learns plastically, although slowly, every time the hippocampus causes it to retrieve a memory (to reactivate a specific pattern of cortical activity). If this is true, then we should expect that the many memories that the hippocampus holds, that are never reactivated, would never "migrate" to the cortex. In other words, if you never recall a short term memory it will never make it into long term memory. Clearly, the things that we think about the most are the most ingrained in our memory, but does it have to work this way? It is very hard to be sure. I imagine that migration could happen below the threshold of consciousness or perhaps during sleep but I think that migration is a cumulative process where the cortex slowly learns the patterns that are brought up most frequently. This may account for why things that were never recollected become the hardest to recall with time.
Another pertinent question then would be: Once the cortex has learned to code for a memory that was previously held in the hippocampus, does it remain in the hippocampus? Also it is clear that even though the memory is transferred from the hippocampus to the cortex, it changes subtly. The hippocampus holds contextual information whereas the cortex holds a mysterious brand of memory that I would describe as fragments of imagery. Understanding the fundamental differences between cortical and hippocampal memory must involve understanding how they are transferred. Why would the hippocampus interact exclusively with the association cortices and not with sensory cortices? Could it be that taking snapshots of unprocessed stimuli would lead to garbled information or invalid associations? What if the receptive fields of cortical neurons, that were once a part of a specific pattern held together by the hippocampus, change appreciably. Perhaps after two years of cortical remapping, the hippocampus will attempt to complete a pattern, and find that the cortical assemblies that it activates no longer code for the same elementary features that they once did because of cortical plasticity.

This might be a way to create a memory implant: create a specific hippocampal memory and then alter the tuning properties of the cortical neurons involved in the memory to evoke different imagery. As long as you could keep the person from consciously understanding what was done the fabricated memory should feel authentic. But the weights of our cortical maps are changing everyday with experience, and this must make hippocampus-driven coactivations fuzzier with the progression of time. Perhaps this is related to the reason why the hippocampus seems to lose memories after two years.

So, why does the hippocampus exist at all if it is only around to catalogue memories and slowly transfer them to the cortex? Couldn't the brain just as easily increase plasticity in the cortex, allowing it to remember its own patterns of coactivity? Perhaps the cortex cannot trust that new experiences will be valid or interesting. Perhaps it needs the hippocampus to store memories for it temporarily to determine if they are useful. Perhaps it needs the contextual aspect of hippocampal memory because it allows animals to discriminate between semantic and episodic knowledge. This makes me wonder a lot about the nature of the connections between the hippocampus and the cortex. I think understanding how the cortex and the hippocampus interface will be very important in understanding the nature of memory and conscious experience.
Posted by Dr. Jared Edward Reser at 7:54 PM