At www.cognitivemechanics.net I have been writing a theory about how I think thought works - how it "propagates" or moves through space and time. I write about how thought is made up of the comingling of several concepts at once. In the brain, this involves the simultaneous firing of all of the neurons that represent each of these comingling concepts. The various neurons involved coactivate together and spread their activation energy leading to the activation of new neurons corresponding to the concept that is the most closely linked (associatively or causally) to this particular set of concepts. Every second, as thoughts change, old concepts are removed, new ones are added, but yet a large number persist. Here is a diagram attempting to show how concepts are displaced, newly activated, and coactivated in working memory to form the “stream” or “train” of thought. 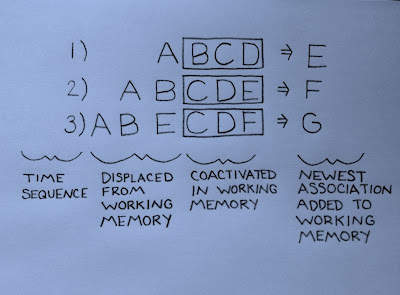 Each concept is represented by a letter and the order in which they are pulled into consciousness follows alphabetical order. 1) Shows that concept A has already been displaced from working memory and that now B, C and D are coactivated. When coactivated, these concepts combine (or spread) their activation energy to activate a new concept, E. Once E is active it immediately becomes a coactivate, restarting the cycle. 2) Shows that concept B has been displaced from working memory, C, D and E are coactivated, and F is newly activated. 3) Shows that concept E, but not C has been displaced from working memory. In other words, what is displaced is not necessarily what came first, but what has proven, within the network, to be the most valuable to the given set of coactivates. C, D and F coactivate to make G active.
Importantly, it would be almost impossible to break down the activation dynamics in the brain into discrete time frames as is shown here. Also, this model makes it seem that only three concepts are coactivated at a time, whereas this number would be larger (perhaps Cowan's 4 chunks or maybe Miller's “7 plus or minus 2”). Further, the concepts that are displaced from working memory may not be in immediate cortical memory, but may still be held in another form of working memory that involves cortical priming or hippocampal memory. This scheme makes it seem that it is only the concepts that we consciously experience that activate subsequent concepts, but the concepts (or nodes) that are unconsciously primed also contribute to the activation of subsequent concepts.

To read part 2, click here on How Thought Propagates Part 2.