The Octopus Analogy for Thought 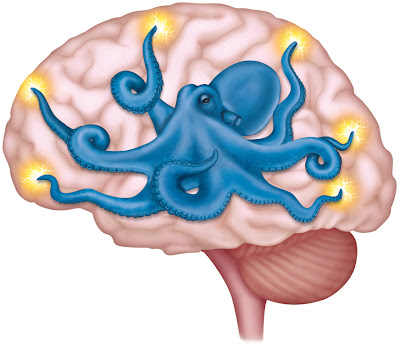 The same process that gives the octopus mobility and stability with its arms,
gives us mobility, stability and continuity in our thought.


Thinking about how thought changes within the brain through time, I came to the conclusion that groups of neurons interact in a very specific, repeating pattern over time. I tried to come up with an analogy to explain this pattern. I  likened it to the pattern of footsteps taken by an octopus that is “seafloor walking.” I feel the analogy works in a few different ways, but the main point is that while much activation in the brain is often rapid and transient, some activation is relatively more long lasting. I think that the long lasting activations lend structure and continuity to thought and contribute to the phenomenon of sentience.


Octopuses occasionally walk along the seafloor and when they do, they often exhibit a particular stride. As they move forward, they plant some of their arms on the sand below them and replant arms that they have left behind. Imagine yourself climbing up a ladder. You hold on to each rung until the rung is so low that you let go and reach for a higher one. Now imagine climbing a ladder with many arms. They wouldn’t all move at once, only the lowest ones would move. This is very similar to how an octopus walks. The key idea is that, at any one point in time, some arms retract from their positions, some arms are relocated to new positions but yet most remain planted firmly where they are. This is very much like the pattern of activation in the cerebral cortex.


Individual nodes (groups of cells that are wired together) in the brain correspond to specific mental representations. Each thought that we have necessitates large numbers of these nodes to represent the various things going on in our mind. The octopus analogy uniquely describes a system where certain nodes are conserved through time as others come and go. The stride of an octopus that plants the majority of its arms temporarily while actively repositioning arms that have let go of their footholds, represents the uninterrupted, nonlinear, spatio-temporal pattern of node activation, deactivation and coactivation in the brain.


Some nodes can probably be retained even after the transitions between a number of thoughts. This happens when your thoughts cycle and change but hold a common element or theme constant. When we attempt to solve a novel and complex problem we try to keep the majority of our octopus arms firmly planted so that we can keep the problem set in mind. The fact that some nodes (within association areas) remain active for prolonged periods (i.e. the octopus arms remain planted), during reciprocal top-down to bottom-up communications, accounts for the continuity found between successive brain states. The longer nodes in association areas can be continuously activated - over a series of states - the longer they can influence sequences of bottom-up imagery in a sustained and consistent way allowing modeling, planning and working memory in general. The result is a stream of consciousness where each thought is quantitatively different from the ones preceding, as newly relevant nodes are added and the least relevant ones are removed.


The fact that the placement of some of its arms are conserved, over sequential moments, gives the octopus balance and stability and it also provides the physical basis for the continuity of thought. The nodes that are conserved reside mostly in association areas whereas nodes in early sensory areas are activated much more transiently. This is as if the arms in back of the octopus (corresponding to posterior sensory cortices) move much more quickly than the forelimbs (which find firm, reliable footholds in anterior association cortices and the PFC). The octopus analogy has the advantage of demonstrating how several interacting elements combine to allow thought. Also because these elements remain active for different durations, thought does not stop and go in discrete steps but is continually “carried along” by those elements that endure through time. All elements, or neural nodes, will deactivate within several seconds, but the intermingling of nodes of some temporal stability with those of more fleeting persistence sustains the associative bridges that allow the thematic and unifying consistency that is a hallmark of cognition.


The routine of node activation and deactivation is very similar to “polypedal locomotion” or movement in animals with many legs. It is not much like the locomotion of an insect such as a millipede or a centipede though because these animals move their legs in stereotypical, repetitive ways where the placement of each leg is not actively influenced by the placements of other legs or of the qualities of the footholds. The pattern of activations in the brain is more like the polypedal locomotion of an octopus that is seafloor walking because it is asymmetrical, dynamic and the placement of the next legs is influenced by the octopus’ stance, posture and the characteristics of the footholds themselves. Most importantly, this model can accommodate nonlinear aspects of neurodynamics. One neural node does not activate the next in sequence. Several nodes are coactivated together and they pool their activation energy to determine which nodes will be activated next.


The total number of cortical nodes that can be coactivated must be somewhat stable given known limitations on things like neural excitability, cortical hemodynamics and working memory. In our analogy the number of available octopus arms is very stable and this represents our fixed, innate capacity for working memory. Even though the number of chunks (psychologically perceptible units of perception and meaning) that can be held in working memory, 7 plus or minus 2, coincidentally coincides with the number of arms that a living octopus has (8), this is not a reliable indication of the number of nodes that can be coactivated in association cortex. This is true because even though chunks and nodes may be relatively congruent, the exact relationship between them is currently unclear. It seems clear though that the octopus has a relatively invariant number of arms and that perhaps, in order to bring a new node into the train of thought it must first let go of some other node. Surely the number of activatable nodes differs from area to area and from task to task, but it probably remains relatively constant within tasks.
It is not always the case that the majority of nodes are conserved from one thought to another. Most nodes can be dropped or abandoned at the same time, i.e. when they become a lower priority. This readily happens when we are exposed to a new, salient, perhaps emotionally laden, stimulus. When this occurs, the octopus “jumps,” taking all of its arms with it, and reorients to the new stimulus and its accompanying set of features. Such a jump would constitute a disruption of mental continuity. So clearly mental continuity can be viewed on a continuum where a high proportion of nodes are conserved between brain states on one end of the continuum and a low proportion are conserved on the other end. Disruptions in continuity might occur due to a distracting stimulus in the environment, or from an internally generated stimulus. Evolution has probably programmed the octopus to jump and reposition its arms quickly in order to respond to important sensory stimuli, so that mammals react to them with all of their cognitive resources. Mental continuity is less easily disrupted in humans than it is in other mammals, although perhaps more easily disrupted in people with habituation deficits. Attention and distraction must be intimately related to the temporal conservation of nodes. In fact, the extent of attention deficit and distractibility should be inversely related to the neurological capacity to conserve nodes in association areas from second to second.


Another analog of this analogy is the idea that the octopus will “topple” if it loses its grip on a sufficient number of nodes. This makes the body of the octopus analogous to consciousness because brains become unconscious once coactivation (especially in the frontal and parietal fields) is sufficiently diminished. Nodes in early sensory areas are often active during unconscious states, but nodes in association areas are less active and out of sync with those in sensory areas. Thus anterior-posterior balance and coordination are important for our allegorical octopus.


Unlike subcortical areas, strictly one-to-one, linear activation is probably rare in the cortex. Also, unlike subcortical areas, information processing in the cortex is not compartmentalized into individual nuclei that are relatively isolated from processing occuring elsewhere. Rather, cortical nodes coactivate together to spread the activation energy necessary to recruit, or converge upon, the next set of nodes that will be coactivated with the remaining nodes from the previous cycle. An node is released from coactivation when it no longer receives sufficient activation energy from its inputs i.e. its relevance to the processing demands diminishes. When a node is deactivated, the perceptual or conceptual element corresponding to it becomes deactivated and can no longer impact present experience. Whatever new node is introduced will inform the present sum of coactivates in a unique and informative way.