The cerebral cortex can be divided right down the middle (sagittally) into two, nearly identical hemispheres. It has become clear to neuroscientists in the last few decades why our brain has right and left halves. Far from being redundant, they each process much of the same information in slightly different ways, leading to two complementary and cooperating worldviews. I will explain here why this organization (called hemispheric lateralization) would be beneficial for AI.

Scientists that design AI systems are interested in how to implement important features of the brain inside a computer. Neural networks simulate many of these features today including neurons, axons, and their hierarchical structure. However, neural networks are missing many of the human brain’s key information processing principles. Hemispheric laterality may be one such engineering principle that could give current AI systems the boost they need to reach artificial general intelligence. The main benefit would be that over developmental time these two innately different networks would reprogram each other by being exposed to each other's outputs. In essence, two dissimilar heads are better than one.

Getting a neural network architecture (e.g. Reser, 2016) to benefit from hemispheric laterality would actually be very easy. All you have to do is duplicate the network you already have and then connect the two of them via a large number of high bandwidth weighted links that would act as the corpus callosum (the bundle of tracts that connect the right and left hemispheres in mammals). The connections between them should respect the brain’s natural bilateral symmetry, connecting similar and dissimilar areas across both hemispheres. If you had a million dollar supercomputer running your AI system and you wanted to create a whole other hemisphere, you would have to buy another million dollars worth of hardware, but it may well be worth it. Next let's talk about how they would be different

Each hemisphere of the brain processes information slightly differently. Despite the fact that the macrostructure of the two hemispheres is almost identical, the two are different microstructurally. Many researchers believe that this is because the right hemisphere has an average axonal length slightly (microscopically) longer than the left. This means that the right brain has relatively more white matter (axons), and the left hemisphere has relatively more grey matter (cell bodies). This also means that on average the cells of the right brain are further away from one another. There are many theories as to why the longer-ranging wiring is responsible for the right hemisphere’s tendency for broad generalization and holistic perspective. The left brain is more densely woven and this might underlie its ability for detailed work and close, quick cooperation between neurons.

People with a left hemisphere injury may have impaired perception of high resolution, or detailed aspects of an image, whereas those with right hemisphere injury may have trouble seeing the low resolution, or big picture aspects of an image. In other words, they miss the forest for the trees. Moreover, attending to the Ds in the figure below activates the left hemisphere, whereas concentrating on the “L” that these Ds form activates the right.

It takes messages just a tiny bit longer to travel from one neuron to another in the right hemisphere. Neuroscientists think that this causes the two hemispheres to process the same informational inputs slightly differently. Each side learns during its development while organizing its thoughts according to a different algorithm and this leads each hemisphere to become a master at its unique way of perceiving and responding to the world. This discrepancy in temporal processing parameters makes the feedback and crosstalk between these two non-identical specialists meaningful. These would be commensurate to specialists that could check, balance, reconcile, compare, and contrast their approaches. If they processed information in exactly the same way it would be unnecessary to have two, but because they don’t they provide a type of stereoscopic view on the world similar to the view provided by our two offset eyes. This enables them to form their own perceptions and opinions and then reconcile with one another. Right now, no AI systems have anything like this. 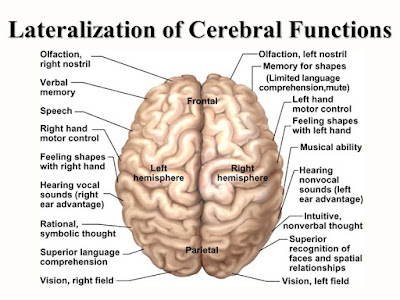 It would be easy for the AI architect to take two identical neural networks and then alter each one so that they are each capable of generating different, but equally valid perspectives on reality. There are countless parameters that could be fine-tuned to do this. However, they should probably start with the average connectional distance between neural nodes in the network. If the hardware was neuromorphic they could literally increase the length of the axons, or if the software was responsible for rendering the network then brief variable pauses could be introduced between the links. In a computer these variables could be changed at any time according to processing priorities. In other words, if the AI system anticipated that its left hemisphere should “lean” even more to the left to help it solve a particular problem, it could alter these “temporal weights” in real time. There would be too much complexity in finding the optimal parameters to use human trial and error, and instead genetic algorithms would have to be used.

Our brain’s two hemispheres also differ as to their value systems. Our left hemisphere is dedicated to approach behaviors, and our right hemisphere is dedicated to withdrawal behaviors. Stimulating the left hemisphere of a rat will make it go toward a new object, whereas stimulating the right side will make it back away from that object. The fact that vertebrate brains have made this fundamental differentiation between approach and withdrawal for hundreds of millions of years suggests that it might represent an organizing principle that should be used in AI. One way to do this would be to wire up the AI’s “subcortical” appetitive and motivational centers (like the ventral tegmental area and the nucleus accumbens) involved in reinforcement learning with the left hemisphere, and to wire up the threat detection centers (like the amygdala) involved in punishment learning with the right hemisphere. Can you think of a more important distinction between two fundamentally important behavioral influencers? I can’t. AI needs two, functionally equivalent, dedicated processors, one for approach/liking/curiosity, and one for withdrawal/disliking/fear. As I have explained elsewhere both hemispheres should influence the dopaminergic system and sustained firing so that important rewards and threats can be maintained in mind; however, the left should be focused on approaching those rewards, and the right should be focused on withdrawing from the threats.

In the mammal brain, at any moment in time one hemisphere will be more active than the other (dominant). Its behavior at that point in time will be influenced by the dominant hemisphere. Approach and withdrawal form a pivoting scale for how we act in the world. They also structure our conscious attention even when we aren’t moving or behaving by allowing us to pivot between interest and disinterest. The AI agent would also have to continually select a dominant hemisphere to give priority to either approach or withdrawal at every point in time.

As in vertebrate animals, the left hemisphere could be used to control the right half of the AI’s robot body and the right hemisphere could be used to control the left half. This could be a good way to ensure that both approach and withdrawal have equal potential behavioral outputs. It seems that this would create a robot whose two sides would pull it in different directions. But this is how it works in the brain and you and I aren’t pulled in two directions. The fact that both networks are so densely connected through the corpus callosum, and that they developed together side by side probably play a big role in their cooperativity.

Certainly, widespread hemispheric lateralization in vertebrate animals indicates that laterality is associated with an evolutionary advantage. It is pretty clear to see that its unique features could also contribute to consciousness. This dichotomous organization might be similarly advantageous in the creation of human-like intelligence, and superintelligence in computers.