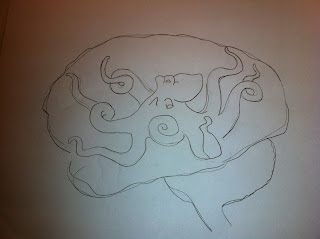 Here is an unabbreviated version of the abstract that I submitted for a January symposium at USC:

The present analogy for the neurophysiology of thought involves a many-armed octopus grabbing and releasing footholds as it pulls itself from place to place. This is meant to illustrate that the thought process involves a cyclical pattern of cortical activation, coactivation and deactivation. Coactivations (footholds held simultaneously by the octopus) fluctuate as cortical areas that continue to receive sufficient activation energy are maintained, areas that receive reduced energy are released from activation and new areas that are tuned so as to receive sufficient energy from the current constellation of coactivates are converged upon, recruited and incorporated into the remaining amalgam of active areas from the previous cycle. Newly recruited areas contribute their inputs to those of the remaining previous inputs altering the mental representations that are produced. Such a newly activated area, or primed node, corresponds to a cortical module (composed itself of neural assemblies) that, when coactivated with other such modules, unites discrete features of long-term memory into composite, global mental imagery. This model defines an individual thought as the imagery produced in primary and secondary sensory areas in response to a particular set of coactivates in association areas. The thought changes once association areas respond to this imagery with newly activated modules and send their new sum of inputs back to the sensory areas for the creation of modified imagery (reperception). The process whereby these modules fluctuate spatio-temporally is taken to be analogous to the nonlinear stride of an octopus that plants the majority of its arms temporarily while actively repositioning arms that lie behind it, toward the front - in the direction of its movement. The fact that some modules are conserved (the arms remain planted), during these reciprocal oscillations between top-down association areas and bottom-up sensory areas, is taken to account for the continuity found in successive thoughts. The result is a stream of consciousness where each thought is slightly different than the ones preceding them as new modules are added and old ones are taken away. Some modules are retained even after a number of thought cycles. This happens when one’s thoughts transition and change but hold a common element constant and is usually due to module potentiation by the PFC. Sometimes modules are not conserved from thought to thought and the octopus drops most of them all at once. This happens when one abandons a train of thought and quickly reorients to a new, salient, perhaps emotionally laden stimulus. This model predicts that someone with a working memory deficit has fewer of these allegorical octopus arms and that the arms cannot maintain their grasp for as long. The longer top-down (higher-order) modules can be continuously activated, over a series of thoughts, the longer they can influence sequences of bottom-up imagery in a sustained and consistent way allowing modeling, planning and working memory in general.

To find out more visit my new website: http://www.cognitivemechanics.net/.