Poster Presentation on the Mechanics of Thought

Click on the picture below to see the poster that I created for a recent neuroscience symposium at USC. To find out more about these concepts visit my new website at: http://www.cognitivemechanics.net/. 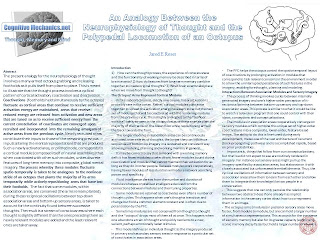 Abstract
The present analogy for the neurophysiology of thought involves a many-armed octopus grabbing and releasing footholds as it pulls itself from place to place. This is meant to illustrate that the thought process involves a cyclical pattern of cortical activation, coactivation and deactivation. Coactivations (footholds held simultaneously by the octopus) fluctuate as cortical areas that continue to receive sufficient activation energy are maintained, areas that receive reduced energy are released from activation and new areas that are tuned so as to receive sufficient energy from the current constellation of coactivates are converged upon, recruited and incorporated into the remaining amalgam of active areas from the previous cycle. Newly recruited areas contribute their inputs to those of the remaining previous inputs altering the mental representations that are produced. Such a newly activated area, or primed node, corresponds to a cortical module (composed itself of neural assemblies) that, when coactivated with other such modules, unites discrete features of long-term memory into composite, global mental imagery. This model defines an individual thought as the imagery produced in primary and secondary sensory areas in response to a particular set of coactivates in association areas. The thought changes once association areas respond to this imagery with newly activated modules and send their new sum of inputs back to the sensory areas for the creation of modified imagery (reperception). The process whereby these modules fluctuate spatio-temporally is taken to be analogous to the nonlinear stride of an octopus that plants the majority of its arms temporarily while actively repositioning arms that have lost their footholds. The fact that some modules ,within association areas, are conserved (the arms remain planted), during these reciprocal oscillations between top-down association areas and bottom-up sensory areas, is taken to account for the continuity found between successive thoughts. The result is a stream of consciousness where each thought is slightly different than the ones preceding them as newly relevant modules are added and the least relevant ones are taken away.

Introduction
1) How can the thought process, the experience of consciousness and the functionality of working memory be described in terms of brain events? 2) How do features from long-term memory combine together to create original thoughts? 3) What brain events take place when we move from thought to thought?

- Models such as Baar’s global workspace theory, Baddeley’s theory of working memory, Damasio’s convergence-divergence paradigm and Edelman’s theories of reentrance and neural Darwinism have done much to lend perspective and insight into the mechanics of thought progression.

- This model uses an analogy, explained in the abstract above, to describe the process of the progression of thought. Please visit http://www.cognitivemechanics.net/ for a full treatment.

The Octopus’ Arms Represent Cortical Modules
- Unlike subcortical areas, strictly one-to-one, linear activation is probably rare in the cortex. Rather, cortical modules coactivate together to spread the activation energy necessary to recruit the next set of modules that will be coactivated with the remaining modules from the previous cycle. This is highly analogous to the “seafloor walking” behavior seen in the octopus because these animals plant the majority of their arms on the ocean floor while repositioning arms in the back towards the front.

- The longer modules in association areas can be continuously activated, over a series of thoughts, the longer they can influence sequences of bottom-up imagery in a sustained and consistent way allowing modeling, planning and working memory in general.

- It may be correct to say that someone with a working memory deficit has fewer modules to select from, fewer modules bound during coactivation and modules that cannot maintain their activation for as long as they do in other people. Because modules work cooperatively, having fewer modules of less duration will reduce network searching power and specificity.

- Some modules are retained as coactivates even after a number of thought cycles. This happens when one’s thoughts transition and change but hold a common element constant and is often due to potentiation by the PFC.

- Sometimes modules are not conserved from thought to thought and the “octopus” drops most of them all at once. This happens when one abandons a train of thought and quickly reorients to a new, salient, perhaps emotionally laden stimulus.

- Another component of this analogy is the idea that the octopus will fall if it loses its grip on a sufficient number of branches. Since the body of the octopus is analogous to consciousness this is appropriate because brains become unconscious once coactivation and the accompanying binding (especially in the frontal and parietal fields) is sufficiently diminished.

- The hippocampus has an ability to detect a set of cortical coactivations and reactivate the rest of the assemblies that were coincident with these in the past in a process called pattern completion. The hippocampus then, has the ability to guide the legs of the octopus toward historically coactivated patterns.

- The PFC helps the octopus control the spatio-temporal layout of coactivations by prolonging activation in modules that correspond to salient concerns in the environment in order to allow the uninterrupted persistence of such features in the imagery, enabling forethought, planning and modeling.

- The process of thinking involves cycles between internally generated imagery and one’s higher-order perception of it- reciprocal priming between bottom-up sensory and top-down association areas. This process is similar to what it would be like to watch a television program that one could control with their ideas, conceptions and conceptualizations.

- The modules in association areas cooperatively converge on sensory modules which combine this unique set of higher-order coactivations into a composite, lower-order, feature-based image. The ability to do this is fine-tuned during early development, makes use of the vast architecture of recurrent (back-propagating) pathways and is accomplished rapidly, based on prior probabilities.

- Importantly, things that follow from our conceptualizations, but that we did not expect to see are routinely rendered in imagery. For instance our sensory areas might pull up the imagery specified by association areas, but elaborate on it with closely associated but unforeseeable embellishments. Thus, the cyclical oscillations of information between sensory and association areas allow them to learn from each other and allow them to integrate their knowledge like two people in a conversation.

- This suggests that one can only perceive the relationship between two abstract ideas if one already has implicit information in the sensory cortex about how to co-represent them in an image.

- As an association node is converged on from nodes upstream, it becomes active and in turn divergently activates the downstream sensory nodes that ordinarily converge upon it. The resultant sensory imagery is then either superimposed over objects perceived in the environment or combined with other features in the mind’s eye. Thus contemplative thought takes place on the same Cartesian stage that sensory experience takes place on. Sense, remembered or reactivated is the substrate of thought.

- A module becomes implicit, and its features become unconscious, when it is no longer needed - during coactivation with its normal coactivates - to recruit another particular module.

-In other words, we create imagery in our minds, but we don’t pay attention to every aspect of the imagery just like we don’t notice every aspect of the perceptions that we create of our environment. Thus this analogy of the “TV you control with your mind” is closely related to the octopus analogy because the elements of the imagery that are attended to drive the placements of the octopus’ free arms.