What follows is the text for the poster that I created and presented at the Cell Symposium on autism, November 2011. 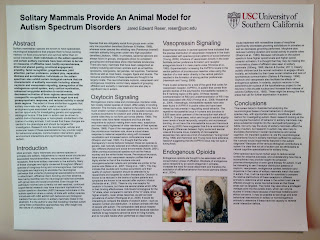 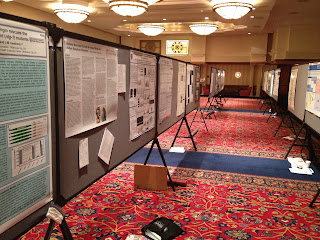 Solitary mammalian species are known to have specialized, neurological adaptations that prepare them to focus working memory on food procurement and survival rather than on social interaction. Both individuals on the autism spectrum and certain solitary mammals have been shown to be low on measures of affiliative need, bodily expressiveness, bonding and attachment, direct and shared gazing, emotional engagement, empathy, facial recognition, gregariousness, joint attention, partner preference, pretend play, separation distress and social approach behavior. Individuals on the autism spectrum also exhibit certain biological markers that are characteristic of solitarily mammals including: altered oxytocin and vasopressin signaling, dysregulation of the endogenous opioid system, early cortical myelination, enhanced amygdalar activation to social events, decreased activation of brain regions associated with conspecific recognition, anomalies in vagal tone and parasympathetic response, and reduced activity in social brain regions. The extent of these similarities suggests that solitary mammals may offer a useful model of endophenotypes associated with autism spectrum disorders and an opportunity for investigating genetic and epigenetic, etiological factors. If the brain in autism can be shown to exhibit distinct homologous or homoplastic similarities to the brains of solitary animals, it will reveal that these changes are central to the phenotype and should be targeted for investigation. Research into the neurological, cellular and molecular basis of these specializations may provide insight for behavioral analysis, communication intervention, gene-environment interactions and psychopharmacology for autism.

Introduction
Most animals, many mammals and several species of primates are solitary. Adjustments to neural social circuits and associated neurotransmitters, neuromodulators and their receptors, fine-tune solitary mammals to live solitarily. Many of these changes are highly conserved throughout different species of nongroup-living and nonmonogomous mammals. Biologists are beginning to elucidate the neurological pathways that underlie physiological specializations involved in attachment, affiliative intent, bonding and their absence. Also being identified are the neurological traits that correlate with group size and social proclivities. Even though the pathways involved are currently not well-resolved, continued experimental research may have important implications for autism spectrum disorders (ASD) because individuals on the autism spectrum share a variety of traits with solitary species. Individuals with ASD exhibit both behaviors and biological markers that are common in solitary mammals (listed in the abstract). It is the author’s view that modeling inherited autism using these comparative approaches may offer insight into the nature of underlying factors.
Species that are obligately social form groups even under very low population densities (Bothman & Walker, 1999), whereas some species like whistling rats (Paratomys brantsii) maintain solitarily living even under very high population densities (Jackson, 1999). In primates, savanna baboons are always found in groups, orangutans show no consistent grouping and chimpanzees show intermediate tendencies. There are many mammals that have been categorized as solitary including well-known animals such as armadillos, opossums, orangutans, red pandas, red squirrels, Tasmanian devils as well as most bears, cougars, tigers and skunks. The reclusive predilections of these species are thought to be largely innate. The neurochemicals oxytocin, vasopressin and endogenous morphine control many aspects of grouping, affiliation and sociality in mammals and are also play a significant role in autism.

Monogamous prairie voles and promiscuous montane voles, two closely related species of rodent, differ widely in bonding behavior. The montane vole, relative to the prairie vole, has a much smaller number of receptors in the caudate nucleus and nucleus accumbens for oxytocin and unlike the amorous prairie voles they do not form pair bonds (Marler, 1968). The montane voles have fewer receptors and thus are less responsive to oxytocin making them more wary, suspicious and more easily frightened of other members of their species (Marler, 1968). Pups of the monogamous prairie vole, but not the promiscuous montane vole, show a robust stress response to maternal separation along with increased vocalization and increased serum corticosterone levels (Shapiro and Insel, 1990). It is thought that the wide discrepancy in social behavior between these two species is genetic, was naturally selected and reflects adaptation to two very different physical and social environments (Adolfs, 2001). Other promiscuous/asocial species such as the rhesus monkey and the white-footed mouse, Peromyscus leucopus, have oxytocin and vasopressin receptor profiles that are highly similar to that of the montane vole and monogamous/social rodents and primates are similar to the prairie vole (Bales et al., 2007; Wang et al., 1997). This may indicate that caudate and nucleus accumbens and their quality of oxytocin reception should be attended to by researchers and targeted by autism therapeutics. Oxytocin is known to be reduced in the brains of autism patients and symptoms are known to be reduced after oxytocin infusion (Hollander et al., 2003). There is only one receptor for oxytocin in humans, but there are several alleles which differ in their binding effectiveness. Individuals homozygous for the “G” allele, when compared to carriers of the “A” allele, show higher empathy, lower stress response, as well as lower prevalence of autism (Rodrigues et al., 2009). It would be interesting to compare the details of oxytocin action - such as receptor number and distribution - in solitary animals with that of people with autism. The comparable data about receptor density in humans has not been determined because injection methods to tag receptors cannot be done in living humans, and do not yield results when performed on dead brains.

Experimental studies in several species have indicated that the precise distribution of vasopressin receptors in the brain is associated with species-typical patterns of social behavior (Young, 2009). Infusions of vasopressin directly in the brain facilitate partner preference formation and receptor antagonists block it in male prairie voles (Winslow et al., 1993). Experimentally increasing the AVPR1A levels in the ventral pallidum of promiscuous meadow voles using the injection of a viral vector directly in the ventral pallidum resulted in the formation of strong partner preferences (Hammock and Young, 2006).

There is also evidence for a role of the gene that codes for vasopressin receptor, AVPR1A, in autism that comes from genetic studies of the polymorphic microsattelite repeats in the 5’ flanking region of the gene. Of these repeats overtransmission of RS3 and undertransmission of RS1 has been associated with ASD (Yirmiya et al., 2006; Wassink et al., 2004). Interestingly, microsatellite repeats have also been found in AVPR1A in prairie voles and have been viewed as instrumental in regulating social behavior. The repetitive microsatellite locus in humans and bonobos is 3,625 base pairs upstream of the transcription start site of AVPR1A. Chimpanzees, which are thought to exhibit slightly lower levels of social reciprocity, empathy and sociosexual bonding, do not have this microsatellite locus and Hammock and Young (2005) have suggested that this is reminiscent of the genetic differences between highly social and asocial voles at this same locus. Instability of microsatellite sequences may serve as a kind of evolutionary “tuning knob” (King, 1994) and Hammock and Young have done extensive research suggesting that the AVPR1A locus may be such a tuning knob.

Endogenous Opioids
Endogenous opioids are thought to be associated with the consummatory phase of affiliation. Blockade of endogenous opioid receptors by an opioid antagonist in primates increases the need for social attachment and therefore the solicitation of affiliative behavior from social partners (Martel et al., 2004).

Acute treatment with nonseditive doses of morphine significantly decreases grooming solicitations in primates as well as decreases grooming performed. Morphine also reduces huddling duration and social activity in prairie voles (Shapiro et al., 1989). Because individuals on the autism spectrum have higher opioid levels and higher opioid receptor activation, it is thought that they may be missing the consumatory phase of affiliation also seen in solitary mammals (Gilberg, 1995; Machin & Dunbar, 2011). Clearly autistic children lack the normal motivation to engage others socially, as indicated by their lower social initiative and lack of spontaneous communication (Sahley & Panksepp, 1986). Oxytocin and vasopressin also facilitate the effects of endogenous opiates. In rodents, oxytocin neurons in the paraventricular nucleus of the hypothalamus project to the neurons in the arcuate nucleus and increase their release of opioids (Csiffary et al., 1992). These might be among the first areas that call for further examination in autism.

Conclusion:
This review helps to illustrate that analyzing the neurobiological bases of social behaviors in divergent species may, with appropriate caution, constitute a valuable method for investigating autism. Basic research looking at the neurological foundation of behavior in solitary mammals may allow substantial insights into the neuropathophysiology of ASDs. Not only may the study of solitary mammals affect the study of autism, but research in autism may also help to elucidate phenomena in social neuroscience and social cognition. An important question is: are the neurobiological mechanisms found in solitary mammals sufficient to capture the nuanced social impairments featured in the autism diagnosis? Because of the various etiological contributions to autism it is clear that not all of autism can be attributable to natural cognitive specializations for solitary living.

Other species have found myriad ways to reduce social contact for adaptive purposes, and understanding how this is accomplished may provide insight into prosocial pharmacotherapeutics or even gene therapy for autism. It will be interesting to see if receptor distribution patterns of oxytocin, vasopressin, endogenous opiates, serotonin and dopamine in the brains of solitary mammals match that seen in autism. If so, it will be important for scientists to compare the relative distributions of these receptors in different animals to determine which areas in the autism brain are not affected enough by social neurochemicals so that these areas can be targeted. The model may also allow a privileged vantage point into the autistic brain, which can only be studied in limited ways because of technical limitations and ethical concerns. It may be possible to test drugs and even behavioral interventions in solitary or nonmonogamous animals to determine if these have the capacity to reverse social interaction deficits.

To see the entire manuscript click here.
Posted by Dr. Jared Edward Reser at 11:21 AM