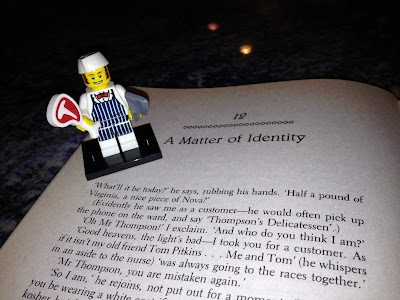 I found a lego minifigure the other day who is dressed as a butcher and it reminded me of the the delicatessen owner in Oliver Sacks’ book, The Man Who Mistook His Wife For A Hat. In the chapter titled “A Matter of Identity,” Sacks enters a clinic room where he is greeted by a delusional Mr. Thompson. Mr. Thompson is a former deli owner who, because of Korsakoff’s dementia, struggles to remember anything new. The disorder is often due to severe alcoholism and is associated with anterograde amnesia, retrograde amnesia, lack of insight, apathy and confabulation. Confabulation is a verbal statement that contains a memory disturbance that causes the person to inaccurately describe the past or present. It is often referred to as honest lying.   I think that confabulation, as a natural phenomenon, is fascinating – mostly because I catch myself doing it on small scales all the time. We all confabulate when we tell stories or relate past events. We add small bits that don’t belong as our memory tries its best to fill in gaps. Mr. Thompson’s degree of confabulation though, taught me a lesson that I’ll never forget. The following passage showed me that when memory fails utterly, humans have a tendency to compensate, by inventing reality:

'What'll it be today?' he says, rubbing his hands. 'Half a pound of Virginia, a nice piece of Nova?' (Evidently he saw me as a customer—he would often pick up the phone on the ward, and say 'Thompson's Delicatessen'.)

'Good heavens, the light's bad—I took you for a customer. As if it isn't my old friend Tom Pitkins ... Me and Tom' (he whispers in an aside to the nurse) 'was always going to the races together.'

'Mr Thompson, you are mistaken again.'

'So I am,' he rejoins, not put out for a moment. 'Why would you be wearing a white coat if you were Tom? You're Hymie, the kosher butcher next door. No bloodstains on your coat though. Business bad today? You'll look like a slaughterhouse by the end of the week!'

Feeling a bit swept away myself in this whirlpool of identities, I finger the stethoscope dangling from my neck.

'A stethoscope!' he exploded. 'And you pretending to be Hymie! You mechanics are all starting to fancy yourselves to be doctors, what with your white coats and stethoscopes—as if you need a stethoscope to listen to a car! So, you're my old friend Manners from the Mobil station up the block, come in to get your boloney-and-rye ...'

William Thompson rubbed his hands again, in his salesman-grocer's gesture, and looked for the counter. Not finding it, he looked at me strangely again.

'Where am I?' he said, with a sudden scared look. 'I thought I was in my shop, doctor. My mind must have wandered ... You'll be wanting my shirt off, to sound me as usual?'

'No, not the usual. I'm not your usual doctor.'

'Indeed you're not. I could see that straightaway! You're not my usual chest-thumping doctor. And, by God, you've a beard! You look like Sigmund Freud—have I gone bonkers, round the bend?'

'No, Mr Thompson. Not round the bend. Just a little trouble with your memory—difficulties remembering and recognising people.'

'My memory has been playing me some tricks,' he admitted. 'Sometimes I make mistakes—I take somebody for somebody else ... What'll it be now—Nova or Virginia?'

So it would happen, with variations, every time—with improvisations, always prompt, often funny, sometimes brilliant, and ul¬timately tragic. Mr Thompson would identify me—misidentify, pseudo-identify me—as a dozen different people in the course of five minutes. He would whirl, fluently, from one guess, one hypothesis, one belief, to the next, without any appearance of un¬certainty at any point—he never knew who I was, or what and where he was, an ex-grocer, with severe Korsakov's, in a neurological institution.

He remembered nothing for more than a few seconds. He was continually disoriented. Abysses of amnesia continually opened beneath him, but he would bridge them, nimbly, by fluent confabulations and fictions of all kinds. For him they were not fictions, but how he suddenly saw, or interpreted,the world. Its radical flux and incoherence could not be tolerated, acknowledged, for an instant—there was, instead, this strange, delirious, quasi-coherence, as Mr Thompson, with his ceaseless, unconscious, quick-fire inventions, continually improvised a world around him—an Arabian Nights world, a phantasmagoria, a dream, of ever-changing people, figures, situations—continual, kaleidoscopic mutations and transformations. For Mr Thompson, however, it was not a tissue of ever-changing, evanescent fancies and illusion, but a wholly normal, stable and factual world. So far as he was concerned, there was nothing the matter…

To read more about my own memory failures that I have noticed click here:
My Personal Experience with Chronic Stress: Compromised Cognition


Here are a few of my favorite books by Oliver Sacks: