Computer Short-term Memory is Not Working Memory, But It Could Be 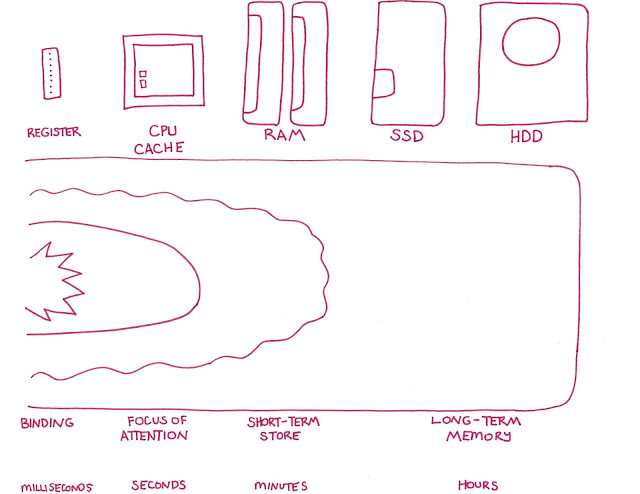 The Differences Between Computer and Human Short-term Memory at a Glance:

1) The memory hierarchy in computers is composed of separate modules and information must be transferred between them. In the brain these modules are embedded within one another.

2) Short-term memory in the brain is bound and integrated together to create context. In a computer short-term memories appear as a list and are disconnected from each other.

3) In the brain short-term memory is used to search for the next update. In a computer it merely remains available in case it is called upon.


To retrieve information from long-term memory a computer copies bytes of information (such as 01100101) from the storage drive (HHD, or SSD) to the CPU. These bytes (which comprise data or program instructions) are processed inside the CPU. If it is likely to need this information again soon, it will save it in a form of short-term memory such as CPU cache, or RAM. It saves temporary copies of information that will be used again in smaller storage closer to the CPU. It does this because retrieval from the large capacity long-term memory is very slow. Oversimplifying, you can think of data that is expected to be needed on the order of milliseconds to seconds as being stored in CPU cache (L1, L2, L3). Data expected to be needed on the order of seconds to minutes is stored in RAM. The rest of the data, which may or may not be needed, is stored in long-term memory.

Computers are often described as having a “memory hierarchy,” expressed as a pyramid with different levels of memory storage. This is also referred to as a caching hierarchy, because there are different levels of short-term memory with different associated speeds. The levels at the top are faster, smaller, and more energetically expensive. The same could be said for human memory, because there are several levels, the levels at the top are faster, and more metabolically expensive. The table above is my attempt to compare the levels of these two hierarchies. 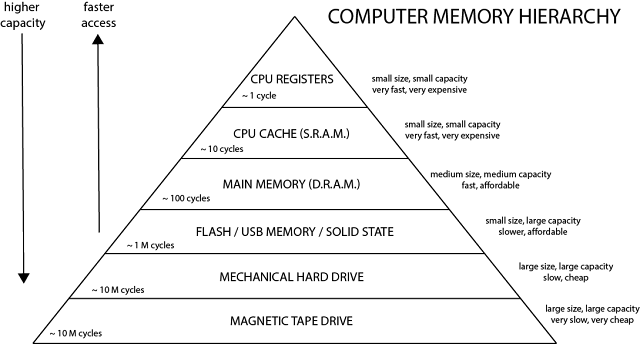 Sustained firing and synaptic potentiation together are referred to as working memory, a psychological construct that overlaps with attention, and consciousness. Working memory is composed of concepts that are persistently coactive for a period of time. When you are in the middle of a task, information about the current step in that task is activated by sustained firing, and information about the previous steps you just took are activated by synaptic potentiation. What you are reading right now is made available for several seconds due to sustained firing. The information in the beginning of this post, and your thoughts about it, are made available due to synaptic potentiation. These two stores interact and cooperate, just like CPU cache and RAM. In both cases they allow the coordination of information processing resources over time. 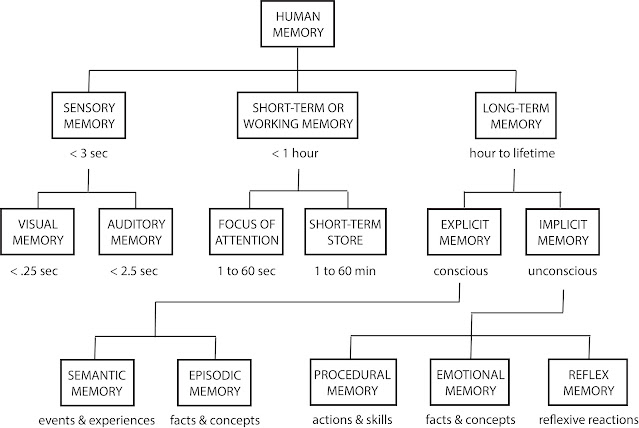 There are many differences between the short-term memory of computers and brains though. Information held in a computer’s CPU cache or RAM is not united or integrated in any way. It is simply made available in case the instructions in the program it is running call for it. These are simply items in an unconnected list. In contrast, all of the information that is currently active in the brain is bound together in a process called neural binding. This turns a list of items into a composite scene, a scenario, or a situation. It makes for a conceptual blending of information. This creates mental content to attend to and be conscious of: declarative, semantic context.

There is no context in computer short-term memory, just a group of disconnected items. For instance, if I give you four words you will try to create a dynamic story out of them, but a computer will merely hold these four words statically. There is very little information integration in the short-term memory of a computer. In a computer, because the items active in each state are not bound together in any way there is no connective tissue within a state. This is the first reason that computers do not have consciousness, and that it doesn’t “feel” like anything to be a computer. The second reason has to do with the integration and connective tissue between states.

Both a computer program and the human mind progress serially. One state of short-term memory leads to the next state. They both usually start with a problem state, and progress through a chain of intermediate states toward a goal state. To do this they must update their short-term memory iteratively. This means that new items must be continually added, others must be subtracted, but other must remain.

All computers using the Von Neumann architecture routinely use iteration when updating cache memory. Because these stores are constantly updated with new information they must evict old information. There are many replacement policies for determining which information to evict from cache, including first-in first-out (FIFO) and least recently used (LRU). LRU is based on the observation that the most recently activated information has the highest probability of being needed again in the near future (all else being equal).

The various memory stores in the modern computer’s memory hierarchy (static RAM,  dynamic RAM, virtual memory, etc.) are all incrementally updated where, second by second, some data remains and the least used data is replaced (Comer, 2017). Thus, the updating of computer cache memory is iterative in the same sense it is in the brain. However, modern computers do not demonstrate self-directed intelligence, so there must be more to the human thought process than LRU, and iterative updating. This unexplained factor may be found, not in the way cached memory is updated, but in the way it is used while active.

What links successive processing states together is very different in brains and computers. Digital, rule-based computing systems use cache to speed up delivery of data to the processor. However, the next bytes of data needed by the CPU are not determined by the contents of the cache itself. The instruction sequence of a computer’s operations is determined by its program. The next instruction is dictated by the next line of executable code.

Then what determines the instruction sequence of thought? Well, mammalian brains use cache (working memory) as parameters to guide searches for the long-term memories to be accessed next. The next instruction used by the brain is determined by what is currently in its short-term memory. In the brain all of the active neurons fire at the inactive neurons they are connected to, and whatever is activated the most will become part of the next state. This means that the content active in short-term memory is used (in a process called spreading activation) to search for the next update to short-term memory. The various bytes of data within computer cache memory can certainly be considered coactive, but they are not “cospreading.” That is, they do not pool their activation energy to search long-term memory for relevant data as in the brain.

The next state of a computer is determined very deterministically by its code irrespective of what is held in cache. But the next state of a brain is determined stochastically by the cache itself. Computers do not use the contents of their short-term memory to search for the updates that will be added in the next state. Brains do. Until computers or computer programs are designed to do this they will not be able to be conscious, and will not demonstrate human-level intelligence.