The Stream of Thought is a Looping Vector

In 2005 I was waiting for the bus, wondering about consciousness, and doodling on the back of a journal article I had printed out. In doing so, I convinced myself that the stream of thought can be described by a single line that loops every few centimeters. A rational line of reasoning that stays on topic would loop and then continue to run in the same direction (vector) that it was in originally. A series of loose associations, on the other hand, would exit the loop at an unpredictable tangent and start off in a new direction, irrespective of the direction of the line before it. In this model, the direction of the line indicated the direction of the stream of thought. Thus a line that continues in the same direction will progress toward a goal, whereas a line that is constantly changing directions might be making interesting new associations, but has no long-term intention or goal. The pictures below illustrate the difference between these two strategies or modes of operation. 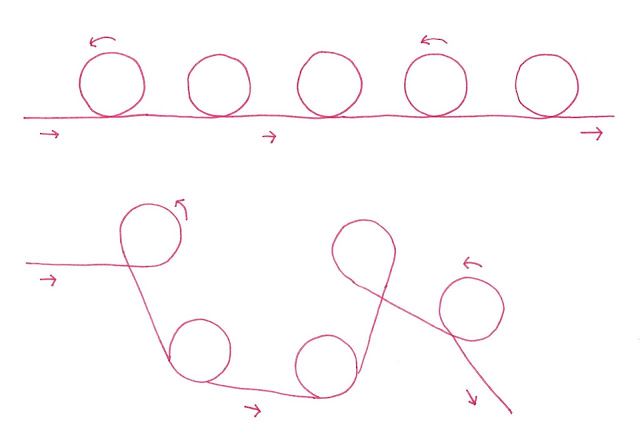 This idea, and these doodles, strongly influenced my understanding of the thought process. It went on to influence my model of working memory and consciousness (Reser, 2011; 2016). However, I never wrote anything about it or elaborated on it. Let’s do so here. Specifically, let’s consider this model relative to the current cognitive neuroscience of working memory, and my 2016 model of the stream of thought.

A line that loops is changing course, and experiencing a detour, perhaps fleshing out a related problem. This means that the items or representations coactive in the focus of attention have changed and are iterating though a different scenario. But if after the loop the line of thought regains its original course then it will return to the items it was previously holding and continue to iterate. The detour (loop) may have introduced important new representations that will help it towards its goal. For example, you may be thinking about what will be involved on your bus trip to another city. Once you board the bus in your imagination you realize that you have to pay and you model what it will be like to purchase a ticket to ride. Your interaction with the bus driver, and your wallet pulls you away from your thoughts about the trip itself. Now you could forget about the trip and go on thinking about your wallet, how old and worn it is getting, and what kind of wallet you want to replace it with. This would involve a change of course for your vector, or line of thought. Or you could imagine yourself paying the fare and resuming the next step related to your trip, such as finding out where you need to get off. This would involve your line of thought looping around another set of mental representations, but then returning to the original representations (bus, trip, destination, etc.).

In my 2016 model of working memory (Reser, 2016) I use uppercase letters to denote items of thought. When two successive thoughts share a large amount of content they share a large proportion of letters (e.g. thought one = A, B, C, D and thought two = B, C, D, E). When two successive thought share less content, they share fewer letters, and thus carry less continuity (e.g. thought one = A, B, C, D and thought two = D, C, E, F). In the first example above the two states shared most of their active representations in common (B, C, and D). In the second example though, the two states only shared one common representation (D). The next figure applies this general model to the discussion about lines and loops discussed earlier. 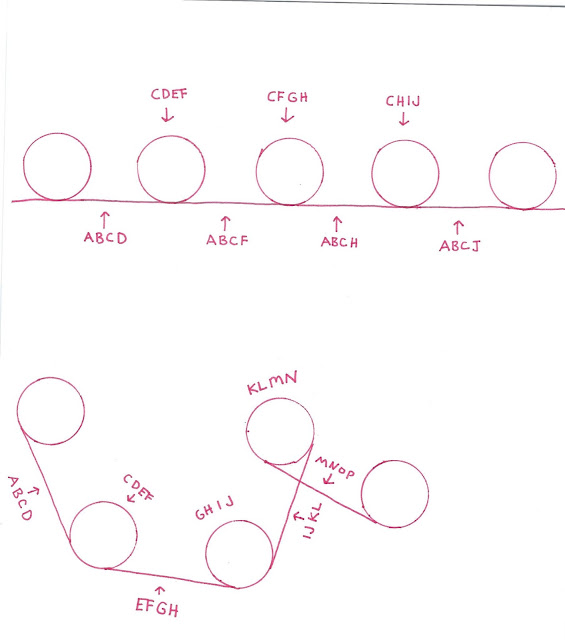 As you can see the first figure uses a single new representation introduced by each loop, but then returns to A, B, and C. This represents a prolonged process of thinking about the same concepts in different, connected contexts. In the second figure none of the concepts under consideration are maintained after the loop. There is still continuity between two states, but not between three states. This is clearly more chaotic. I think that these two modes of operation represent two sides of a continuum. I think they corresponds to type one (Kahneman’s thinking fast), and type two (thinking slow), with intermediate rates of updating between the two.

What do you think? Can you see how thought might be taking constant detours, that temporarily interrupt continuity, so that it can introduce new content to the line of persistent content? Do you ever notice that your train of thought breaks away for a few seconds only to comeback more inspired and informed? How about the opposite. Can these respites and detours be distracting?